No, really, don't call him.  I went kinda "semi-homemade" on this one so he'd just storm around my tiny little kitchen exclaiming stuff like "F*&k me!" and "Oh, c'mon!" I don't think I could take that kind of intensity.  But, Ramsey comes to mind because I've seen him rescue so many British pubs and restaurants by going simple and adding a shepherd's pie to the menu. 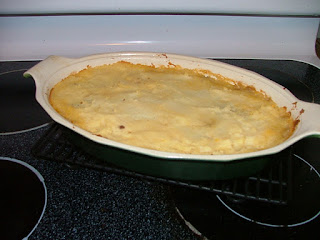 Personally, I haven't had this dish since I was a kid.  I remember my mom making it and it was always one of my favorites.  As I recall, I think hers was pretty simple:  meat and whatever vegetables we had coming in from the garden.  Hmmm, I think I'm realizing where my "throw whatever you have in the pot" philosophy came from.  Well, we've had rain the last two days and South Carolina is still just thinking about cooling off into some semblance of autumn.  At even the prospect of a temp below 60 degrees mixed with a little rain and I start wanting cold weather comfort food.  Ok, ok...I know my brother and sister in law up in Minnesota are laughing right now.  Yes, it's true.  We don't know winter here.  Or real cold.  Or snow.  (They are soooo jealous!)


So, last night the spirit moved me.  As is my usual m.o., I started with a recipe and modified it "Wanna-be style."  The wunderkind came into the meal with an "I'm not gonna like it" attitude, which was most unfortunate.  But, under duress, she managed to eat half her plate and while she'll never admit it, I think she really liked it.  And what's not to like?  I think it turned out pretty daggum awesome.  So, I share my recipe with you...

Heat oil until shimmering (med-high), saute onion until becoming translucent.  Add garlic.  Stir to combine.  Add beef, salt & pepper and cook until browned and cooked through, about 3 minutes.  Sprinkle meat with flour and mix in.  Cook about another minute.


Spread in a 11X7" glass baking dish.  Cover with mashed potatoes, spreading to the edges of dish to create a seal to prevent bubbling over. Spread with a rubber spatula to cover the entire dish. Place on a parchment lined cookie sheet and bake at 400 for 25 minutes, until potatoes begin to brown nicely.  Let sit 15 minutes before serving.

***Disclosures***
Obviously, making homemade mashed potatoes is preferable.  In the interest of time last night, I used a mix.  Shoot me.  Also, using ground lamb rather than beef will impart a deeper flavor.  The recipe actually called for tomato paste, which I'm out of.  So, I substituted Sofrito. I added limas because I had them in the fridge leftover from the other night.

If you try it, let me know what you think.  I was pretty darn pleased.  Have leftovers too!  Happy rustic eating, friends.
Posted by Elizabeth at 7:08 AM