I take great pleasure in recommending others, raving about their services and/or products and telling others how great it is.  I really do love that.  There's a restaurant (locally owned; my fave) that I've told you all about in the past and I've always been very favorable and enthusiastic about.  But, today, I'm not feeling so warm and fuzzy.  In fact, I'm pretty irritated.

My mom and I stopped in there for lunch today.  I ordered one of the specials, which was a turkey Philly.  Neil's a big fan of chicken Phillys, so I reasoned, it must be good with turkey too.  I asked the waitress what kind of peppers they use on the sandwich and she said "bell peppers."  I then asked if they had hot cherry peppers. 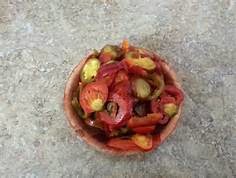 She went to the kitchen and asked and I actually heard the answer "yes."  Ok, great.  I'd like the Philly but ask them to add some hot cherry peppers to the bell pepper please.  No problem.

It was a bit odd to me that the cherry peppers had been battered and fried.  What?  But, they were tasty this way, although I've never, ever seen them cooked this way.

For my side dish, I got fried green tomatoes, which come with a sauce.  Mine turned over and started filling up my sandwich basket.  I asked for an additional sidecar of the sauce. Turns out the sauce was pretty good dabbed on the sandwich. 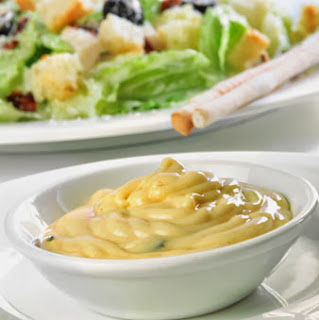 So, it's all good.  Mom and I were both pleased with our lunch.  We had a really attentive and pleasant waitress.  Then we looked at the check.  They charged us $.50 for the cherry peppers and $.50 for the replacement dressing.  Are you freakin' kidding me?

First, in the modern world of rip-off tea that we live in (see this post), it is inexcusably tacky and in poor taste for ANY restaurant to nickel & dime their customers on an extra piece of cheese, more salad dressing, adding onions to a burger, putting jalapenos on whatever I say to put them on, or whatever.  It was all I could do not to blow my stack over this check.  Let's break this down, shall we?

So, from this previous post, we know that a glass of iced tea costs (give or take) a whopping $.11 to make.  I don't have supplies on hand tonight to conduct one of my super-scientific studies, but I feel confident in these statements. 1) If salad dressing costs $.50/Tablespoon, we'd all be eating dry salad because we simply couldn't afford a bottle of dressing to keep in our fridges, and 2) $.50 worth of hot cherry peppers would easily fill up a shoebox, which as any idiot can surmise, is way too much for one, a dozen or even 45 Philly sandwiches. So, to the owners of "XXXX" restaurant in Cayce (names changed to protect the innocent), please explain the logic behind charging me for these miniscule additions to my lunch order. 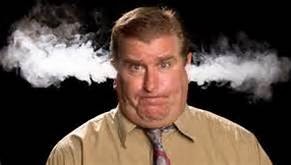 Other than petty, arbitrary and capricious upcharging that does nothing but piss off a previously happy-to-praise-and-rave-about-you customer?  Huh? Hell, if you need the dollar that bad, take it out of your insanely inflated tea revenue!
Posted by Elizabeth at 7:34 PM No comments:

Big Easy on the Mountaintop

You know how when you learn a new word, all of a sudden it seems you hear that word every time you turn around.  I had this experience this weekend with a recipe, or rather, with a dish.

On a food blogger page that I'm a part of, someone posed the question of taking the Ruth's Chris recipe for New Orleans BBQ shrimp and turning it into a cream-based pasta sauce.  She asked for advice, opinions, batted around some ideas of other ingredients to add, et cetera. I've read this Ruth's Chris recipe before but haven't gotten around to making it myself.  It looks and sounds awesome so I need to just quit thinking about it and make it happen.

So, this past weekend I took my little Wunderkind to visit my sister up in Asheville.  It's that time of year again, so we were making a trip to the apple orchard.  (Now I've got apples up to my ears and need to start up all the apple recipes.) My sister says to me on the evening that we arrived, "Hey I was going to make this for dinner.  I made it not long ago when we had a friend over and he went crazy over it."  She hands me a recipe for New Orleans BBQ Shrimp.  To quote Shatner in Airplane II, "irony can be pretty ironic sometimes."  Now it seems this shrimp recipe is really making the rounds and I'm running into it everywhere!

So, Katherine's version was, in a word, delicious.  If you aren't familiar, the shrimp is left in the shell and covered in this New Orleans style sauce and baked.  Since everyone at the table peels their own shrimp, this makes life really easy on the cook. It's loaded with spices and herbs and creates a fantastic sauce.  So make sure you have a good crusty loaf of bread and sop that stuff up like a starving Frenchman. Didn't expect to be transported from the mountains to New Orleans! Take a look at how beautiful this turned out... 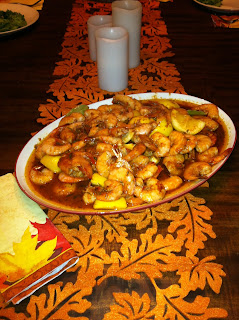 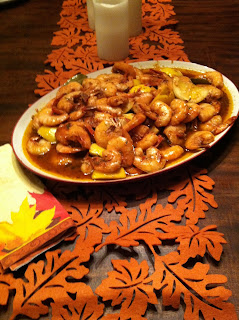 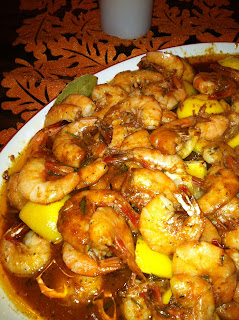 Just gorgeous and tasted divine.  I'm not sure exactly which recipe it was that Katherine used, but the Ruth's Chris recipe is posted below, if you want to give it a try.  This would be a great dish to serve to a crowd at the beach; a nice alternative to the ubiquitous Frogmore Stew.

Directions:
Place a large cast iron skillet on a burner and heat over high heat. Add oil and cook shrimp until they are just done. It's best to prepare shrimp in batches if you do not have large skillet. Remove shrimp and set aside on a large platter.

Add green onions to the oil in the skillet and cook for 1 minute. Add white wine and let simmer until it is reduced by half.

When the wine is reduced by half, add chopped garlic, Worcestershire, Tabasco. cayenne pepper and paprika. Shake the pan well and cook for 1 minute. Reduce the heat to low.

Cut butter into small chunks with the knife and slowly add into pan, shaking fast to melt butter.

Continue to add butter and shake until all butter is melted. Add shrimp back to pan and toss well to coat shrimp with butter and seasonings and to heat the shrimp. Place shrimp on four plates and enjoy.

I know I go off all the time about how much I love the Brown Box Veggies folks, but here I go again.  I have been jonesin' for my veggies big time after I committed the cardinal sin two weekends ago.  Yes, I admit it.  I ordered a box and <gasp> forgot to go pick it up. To say I was devastated is an understatement the size of Texas. If I must force myself to find a bright side, it's that the Veggie Gals, as they like to call themselves, donate any unclaimed boxes to a charity.  But, dammit, that weekend, I wanted to be my own charity and I forgot.

So, as you can probably guess, I've been pining away for veggie weekend ever since. I mean, we've been eating <again, gasp> grocery store produce.  But today was the day!  I wasn't going to have a repeat of last time.  I had a reminder and alarm set on my phone, a sticky note on the inside of the front door, and I had a small carrot tattooed on my index finger to remind me.  I even arrived early.

Yowza is all I can say.  When the Veggie Gal handed over the box, it was all I could do to carry that sucker to my car.  It was heavy.  Really heavy.  But I bolstered my strength with the eager anticipation of opening this treasure chest and carried that bad boy to the car. Once home, I cracked it open and it was like that scene when Vincent opens up Marcellus' briefcase.

The golden light shone upon my face.
So, getta load of this y'all:

I got squash, zucchini, parsley, Roma tomatoes, onions, over a dozen jalapenos (Neil is in heaven), cabbage, cucumbers, pea pods, peaches, apples, pears, and the largest head of romaine I have ever seen in my life.  Seriously, in the romaine world, you wouldn't want to pick a fight with this big guy. See for yourself.

Ok, I realize I'm repeating myself, but if you haven't ordered from Brown Box Veggies before, get online RIGHT NOW! It's a killer deal, it's local produce and it is simply a joy to open that box and see what surprises you'll find inside. Oh, by the way, I was just jerking your chain about that carrot tattoo.  I doubt that even Peter Cottontail would pay money for that!  :-)

Posted by Elizabeth at 7:50 PM No comments: