Marco's Pizza opened in recent months just down the street from my house.  I really didn't pay much attention to it because it just appeared to be another pizza chain.  But, I'll tell you what made me decide to try it out. I know a young guy who moved here from Michigan.  One afternoon he mentioned to me that he was picking up pizza from Marco's for dinner, but he lives across the river, which means he was actually making a trip for this pizza.  Hmmm...why would he do that?  What does he know that I don't?

So, I quizzed him.  He knew this franchise from back home and even worked there during school.  He loves this pizza so much, that it's worth driving from Cayce all the way over to Rosewood. Yes, my curiosity was indeed kindled.  Today was finally the day to give it a shot.

My beautiful girl started out as a very young one eating black olives by the handful, then graduated to having olive, pepperoni, sausage pizza with me and Neil.  I was so proud.  Then, she met other kids.  Before I knew what hit me, she was proclaiming "I only like cheese pizza!"  It was a dark day for me.  My child had succumbed to the boring, uneventful taste of the average kid.  Well, recently, in an effort to shake up the school lunches, I bought some salami from the deli. She went wild!  So, I seized the opportunity.  It went something like this:

"hey Viv, you know something?  Salami is pepperoni's cousin."
"Really? I love pepperoni."
"So, this means you want pepperoni on your pizza like the old days?"
"Oh yes!"

Woo Hoo!  My baby is back!  Tonight, we're just the two of us, so we decided to get pizza. What better time to try out Marco's?  I showed Viv the website and the photo of the "Pepperoni Magnifico."  She was down with it.  We ordered ours with the garlic crust (recommended by my buddy Patrick) and the antipasto salad.  I opted to order online, which gave me a pick-up time of 25 minutes. Not bad at all!  Delivery around here always takes longer than that, and since the place is about a minute and a half down the street, picking it up was certainly no bother. 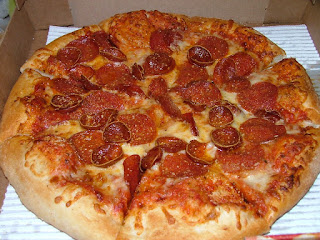 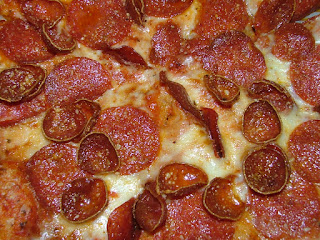 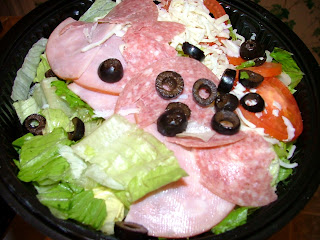 The verdict?  I liked this pizza, but at this point can't proclaim it my favorite.  I mean, it was just pepperoni.  I like a little more action on my pizza, so I definitely want to try some of the other specialty pizzas, or design my own. They have a cool ingredient list, so it could get fun.  The other thing that I like is you get LOTS of choices...the website asked me if we wanted garlic crust, parmesan crust, extra sauce, light sauce, heavy cheese, no cheese, extra this, extra that, split in halves?  I ordered the antipasto salad which was pretty good too.  It was topped with ham, salami, black olives, tomatoes and mozzarella. I didn't order dressing since I have lots of great ones here at home.

Overall, I'd say that I am glad to have another pizza choice so close to home. After all, variety is key in my life.

Posted by Elizabeth at 7:35 PM