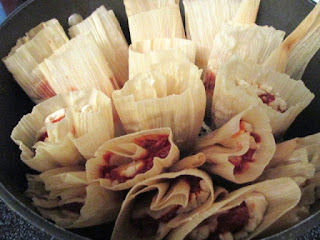 Of all the cuisines, Mexican is one of my all-time favorites.  I love queso and chips as much as the next guy, but for me the ultimate Mexican dish is tamales.  And they are hard to come by. Not many restaurants serve them and it’s even harder to find a person who makes them.  I know. For years, I’ve wanted to learn to make them. I’ve always been told that they are soooooo hard to make.  They are soooooo complicated. They are such a project that someone’s grandmother might make them for a very special occasion. So, I’ve merely dreamed and aspired to become a tamale cook for a very long time.

I came across an old 1980’s Mexican cookbook that a friend was throwing out.  I scooped it up and there it was.  A tamale recipe.  I read it over and over again because I just couldn’t grasp what was so difficult about what I was reading.  And then it happened.  I bought a Boston butt and I made tamales.

I don’t know what I’ve been waiting on. I let others convince me that this was some insurmountable task. But here’s the news flash…it is not difficult to make tamales.  At all.  It takes some time, but it’s not hard. And, they were fabulous!

OMG!  My tamales were fantastic, if I do say so myself!  The sauce has out-of-this-world flavor.  It’s so simple to make. You soak the chiles in hot water to soften them up, then remove seeds and puree them with the soaking liquid. Then you cook the puree with some garlic, flour, vinegar, cumin and oregano. Nothing difficult about that. The pork is stewed with some garlic, onion, bay leaf and peppercorns. After it’s cooked, you shred it, mix with sauce and refrigerate overnight.  Nothing hard about that.

You also save the pork broth for the masa. Refrigerate that overnight so you can skim the fat off before mixing up the masa.  The next day, you simply mix the masa with warm broth, shortening, and baking powder until it becomes a soft, wet dough.  You soak your corn husks in hot water for about an hour to make them pliable. Then, it’s just a matter of spreading out some masa, add some filling and fold.  They steam for about an hour and then you are ready to dig in. The masa was so soft and tender and flavorful. This is key because even in restaurants I’ve had tamales with dried out masa and it ruined the whole dish. The pork was tender and that sauce, oh the sauce!

And none of this was hard to do!  It takes some time, but anything worth doing is worth the time. My parents came to dinner and we all fell in love with the tamales.  So much so that later that  week, I made another batch.  A double batch!

Posted by Elizabeth at 8:14 AM