We all know the phrases/sayings/cliches about how lucky we are if we end up with one good friend. I am fortunate to be able to say that I have 5, not counting my sister. I've explained this so many times to my daughter, who is at the age where she experiences the "friend du jour" concept. My true golden friends are all ladies I met in college. My friend and roommate at Wofford, Heidi, will attest to my freshman assertion that we were there to form "Big Chill relationships."  We succeeded.

So, this is the year that we all hit 50.  Except one December baby, who quietly already celebrated hers and then tried to con the rest of us into thinking it was this coming December. (You know who you are.) Heidi hosted Leigh, Lourdes and myself at her home in Atlanta this past weekend for us to reunite, laugh, cuss like sailors, drink like hobos and generally bask in the glow of our 50 year old awesomeness! (I'm still 49, btw.)

I could go on and on about the weekend, but you are here because you like FOOD.  So, get this...Heidi and her husband Lloyd, along with friends, have invested in a restaurant in their neighborhood of the big ATL. They've been in business for a little over a year.  Their executive chef,  Jason Jimenez, has been named as one of Atlanta's "Up and Coming" chefs. He creates a menu features 6 appetizers, 6 entrees, 6 desserts, every 6 days. 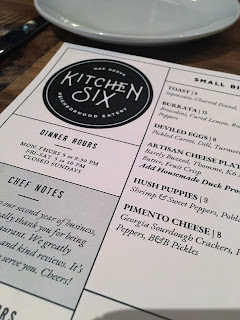 It's like going to Cheers, but a lot nicer. The interior is upscale, yet casual and comfortable and hip. The staff all seem to enjoy being there and were in tune with their customers. To say the atmosphere is friendly is an understatement.  And, from what I've been told, the goal was to create an environment for neighbors to see each other and enjoy some really damn good food.  Having been there, I can affirm that they have achieved that goal.

Ok, let's talk about the food.  The best part, right?  So, we clearly set out to really explore this menu because we almost ordered everything on it.  Per Heidi's recommendation, we started off with the hushpuppies and pimento cheese. 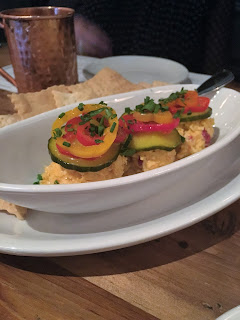 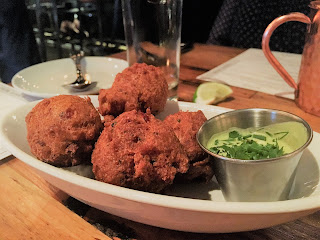 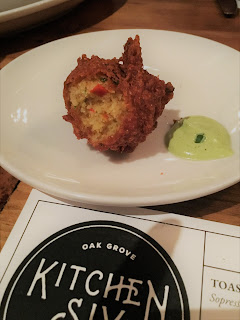 The pimento cheese was served with homemade crackers which were wonderful. They were firm enough to stand up to the cheese but yet tender enough that they just melted in your mouth.  The cheese was topped with pickled peppers and homemade bread & butter pickles.  The flavor of the cheese was prominent, which is sometimes lacking in other pimento cheeses I've sampled.  When my buddy Lourdes bit into a hushpuppy, I thought I was in that "When Harry Met Sally" diner scene.  Yes, I'll have what she's having too.  They were phenomenal.  Everything you want in a puppy...super crispy, not greasy, the inside was tender and then spiked with shrimp and peppers. To take it one step further, they were served with a poblano cream.  Ohhhh, Jason...

In the midst of all this was the GA mule.  I can't even remember exactly what ingredients the Kitchen Six folks used to make this cocktail, but suffice to say, you need to order one. I had a Hendrick's and tonic because I haven't had it in forever.


Our fantastic waiter informed us of a special salad not on the menu that day.  We opted to have one to share.  It was beautiful.  Mixed baby lettuces, apricots, toasted almonds and a blueberry vinaigrette.  Simply delicious. 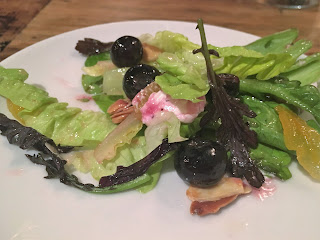 Leigh and Lourdes both chose the Roasted Chicken because Heidi said she doesn't know "what he does to that chicken" but it's so good.  They agreed.  It was served with cute fingerling potatoes and a grilled lemon. 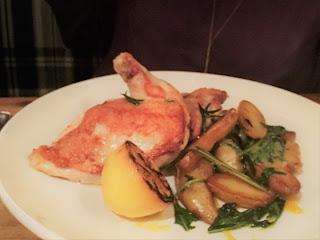 Heidi selected the Pan-Roased Red Fish which, honestly, I don't know if I've ever had. The skin was so delightfully crisp and the fish was perfectly cooked.  Another winner. 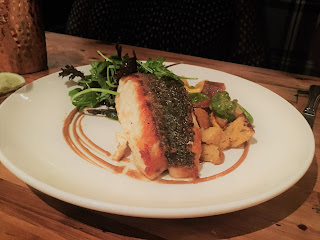 I decided on the Glazed Baby Back Ribs.  It was a toss up between these and the Beef Short Ribs.  The baby backs were served alongside grits and with a side of sauteed apples.  As the lady placed my plate on the table, she said "These grits are gonna change your life."  Instantly intrigued by that prospect, I dove into those grits.  They were indeed fantastic and I do, in fact, feel much better about my world! The ribs were great; nice and meaty and lean (y'all know how I am about fat on meat.) I'm not sure exactly what the glaze was composed of but it doesn't matter because it was just delicious and I wasn't there to dissect anyone's recipe! 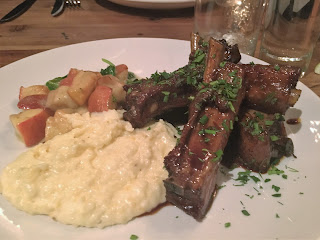 Now it's time for dessert.  We took Heidi's advice again and ordered the Decadent Cake, which is a flourless chocolate cake and the Vanilla Pot de Creme.  Ok, I'm not a huge sweet eater, but good Lord, these were good. 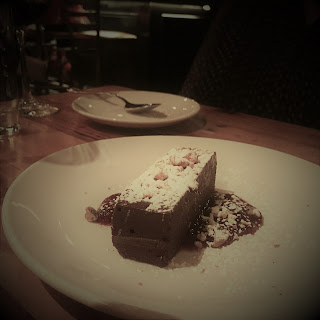 This is the Decadent Cake.  I put a dramatic filter on this picture to illustrate to you the sheer gravity of this cake.  You can just imagine this showing up in a film like Casablanca. It's like a bite of the best ganache-y fudge ever. Chocolate fanatics would sell their souls for this cake. Like the grits, this will change your life.

The Vanilla Pot de Creme is also pretty life-changing.  Rich vanilla flavor with a nut crumble and whipped cream on top.  One of us, who shall remain nameless, practically licked the bowl. 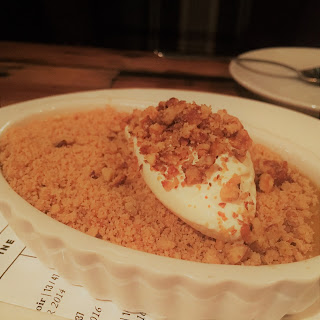