All ham is not created equal

Here in the South, we like pork.  We grow up eating pork chops, ham, ribs, BBQ (all year long!), bacon and sausage of all varieties.  Most people in other parts of the country are familiar with these pork preparations too, but there's one thing that you can only get here.  Country ham.  It's different.  In a good way.  It's Southern. 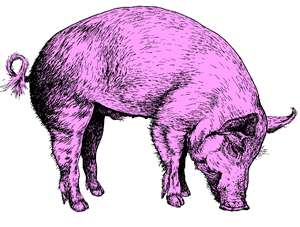 I first realized that not everyone gets the ham thing when I was in Colorado one time.  Hardee's is a Southern-based fast food chain that has been serving breakfast biscuits since about the time I was 8 or 9.  When my sister moved out to CO, she was surprised to find a Hardee's in Fort Collins.  When I visited, we decided to swing by for a biscuit.  Of course, I ordered my old stand-by, the ham biscuit.  I unwrapped the biscuit and exclaimed, "What the hell is this??"  It was a beautiful Hardee's biscuit filled with sliced, pink, DELI ham.  I thought, "OMG, they mixed up my biscuit with a hot ham 'n cheese!"  But, then my sister looked at me, almost apologetically and said, "Oh yeah.  They don't get the whole country ham thing here."

If you're unfamiliar, country ham is a style of curing.   A whole ham is smoked and salt cured, sometimes up to 3 years before being packaged in a cloth sack and hung up in your butcher shop.  It's a big ham too; the whole enchilada.  Picture all those European cooking scenes with sausage links, hams and upside down chickens hanging around the butcher shop.

Most people seem to always think of country ham & red-eye gravy.  But it's also good just warmed up in a skillet and served with eggs, grits, toast, etc.  And of course, on biscuits. In fact, down here, it's not uncommon to find little mini ham biscuits at even the  most formal bridal showers or other elegant affairs.  But here's a tip:  remember that scene in the American President when Prez Shepard sends Sidney that Virginia ham?  Bad idea.  You can't cut up a whole country ham at home.  Unless you keep a table saw in your kitchen.

Why am I telling you this, you must surely be wondering?  Last year, my sister and her husband received a whole country ham at Christmas from a friend.  They stared at it.  And stared at it.  They wielded knives at it but then thought better of it.  Hmmm.  What to do?  They bought an electric knife.  That helped.  Little by little, they sawed away at this big boy and finally the last of the country ham had been cut and happily consumed.  Then, just a few days ago, <<Ding Dong>> the doorbell rang.  There at the door was a cheerful delivery man holding that familiar cloth sack with you-know-what-inside.
So, long story short...you're still awake, right?  At the end of our Christmas weekend, our parents transported that big lump of yumminess back to Columbia.  They found a butcher who sliced the entire thing  for FREE.  Free is oh-so-good.  So, now, we all have delectable country ham ready for immediate use!

Now even though I've gone down my Southern road in this post, I'm not going to talk to you about old standards like biscuits or red-eye gravy.  Instead, I want to share with you one of our favorite recipes from my Dad.  He originally got this from a magazine that featured a recipe from a restaurant in Charleston.  Over the years, we've all tweaked it a little and since that restaurant isn't around anymore, I think we can claim it as our own now.

Add shrimp, kiwi and cream.  Reduce heat to med. low.  Cook shrimp until they are pink and remove them from the skillet.  Boil the sauce 2 1/2 to 3 minutes.  Add shrimp back in, salt & pepper.  Serve over rice. 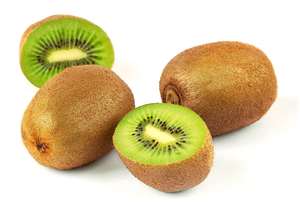 Lick your lips and smack Loretta;
this is some good damn eatin'

Posted by Elizabeth at 3:55 PM