So, kale me maybe 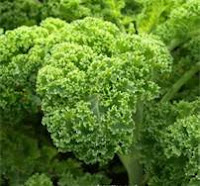 Once upon a time, kale was only known as two things.  Decorative "cabbage-y" things for the Fall garden and the frilly, yet rigid garnish on the dinner plate.  Oh sure, the vegetarians have been consuming this stuff by the truckload all these years, but who ever paid attention to that?  Until the late 80s, John Q. Public viewed vegetarians as hemp-smoking, free-loving, dashiki-wearing weirdos. 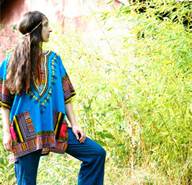 Finally, they broke that mold and emerged into "mainstream America" as health-conscious, animal-friendly, normal people.  (I know my veg friends are getting a kick out of this!) So, then, the rest of the world started paying attention.  "Hey, what do they know that we don't?"  At first, people thought they only ate side dishes.  Some thought there's no way they could keep it up...what about protein? But as more attention and seriousness was paid to our veggie-loving brethren  (and sistren? is that a word?) we began to learn a lot about nutrition and how "we carnivores" could adapt.

Which brings me back to that kale that was tucked in under your baked potato to brighten up your plate.  Kale is really, really, seriously, majorly, hugely good for you.  I'll skip ahead in my history lesson (yeah, I'm a real scholar here!) to where kale is today. Two words:  IT'S EVERYWHERE. But, there's a trick to kale.  I still think it's too rigid to eat raw, although I know people do it.  So, the trick is to cook it correctly.  I've cooked it before and have gotten a thumbs down from Neil.  This caused me to abandon the idea for awhile then I tried again.  This time I went for kale chips.  I kept hearing everyone on Facebook and Pinterest raving about them and how their kids love them. Turns out, I'm the only one who likes them.  Good thing though, because I've learned that I can mow through an entire cookie sheet full of them.  I'm the lone kale eater.  Well, I was...


I came across a Weight Watchers recipe that piqued my interest. 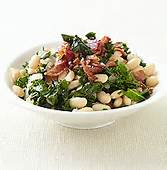 It had bacon.  It had cannellini beans. It had onions. So many elements used Chez Akre. And, it had bacon.  Did I mention that?

<<Ok, despite all I had to say earlier about vegetarianism, clearly, I'm not a vegetarian.
I am an admitted baconivore.>>

In a nutshell, this recipe involves cooking bacon (see photo above for reference.) Crumble it and set it aside. Then, saute some crushed red pepper and garlic in the bacon grease for about 30 seconds and add chopped onion. Cook until the onions soften then add your kale and cook until it starts to wilt.  Add some chicken broth, cover & simmer until the kale is tender.  Add cannellini and cook until liquid evaporates.  Finish it off with some salt, a little sugar and balsamic vinegar.  Sprinkle with bacon and serve it up.

I loved it.  The kale was cooked well and was nicely tender. This is where I've fallen short in the past.  Another way I know this was successful?  Neil actually said, "The kale is good."  This was meaningful because last time the subject came up, he flatly stated that he just doesn't like kale. Unfortunately, the Vivver is going through an intermittent phase of deciding in advance that she's not going to like something, so this kale dish never really got a fair shake from her.

Going back to my vegetarian friends, obviously, this dish can be made without bacon and would be (almost) as good.  I really loved it because I'm all about dark, leafy greens and incorporating more of them into my family's diet.  The beans added some heartiness and protein, of course.  And, well, then there's the bacon.  Need I say more??

Posted by Elizabeth at 7:46 PM