Everybody knows that legumes are good for us.  You know that, right?  But, have you ever really thought about what the definition of legume is?  Does it mean any kind of dried bean or pea?  Something that grows in pods?  Is it only starchy vegetables?  According to Dictionary.com, legumes are defined as:


the large plant family Leguminosae (or Fabaceae), typified by herbaceous plants, shrubs, trees, and vines having usually compound leaves, clusters of irregular, keeled flowers, and fruit in the form of a pod splitting along both sides, and including beans, peas, acacia, alfalfa, clover, indigo, lentil, mesquite, mimosa, and peanut.

Simply put, they are plants whose edible fruits come in pods.  And, they are nitrogen-fixers, which means they grab nitrogen from the air, and convert it into nutrients that enrich the soil.  Oh yeah, and they're really good for you.  They contain vitamins A & C, tons of fiber, iron, phosphorus, magnesium, calcium, riboflavin, folate and niacin, just to name a few.  They are nutrition powerhouses. So, why are they treated like the low man on the totem pole?
My cousin grew up hating, I mean hating, all beans and peas. He's now approaching 40 and can eat some varieties, but still can't get really excited about them. I, on the other hand, grew up loving green beans, green peas, field peas, black-eyed peas, kidney beans, black beans, snow peas and crowder peas. 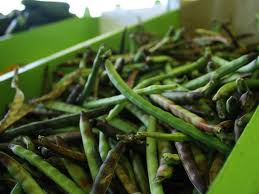 Field peas and crowders are some of my favorites but let's think about this for a moment.  When is the last time you saw either of these on a restaurant menu?  Not even "country cooking" joints like the Thicket feature them.  And, if you grab frozen "field peas" in the grocery store, they aren't field peas.  They're small little peas, they're tasty but they aren't a real field pea.  And crowders are even more scarse.  Unless you live in a town that still has working farms on the outskirts, like here.
Last year I stopped at the corner of Oak Drive & Mineral Springs Road. There are two old guys who stake out this corner with fresh veggies.  On this particular day, they had "boo-koos" of crowder peas.  I couldn't even remember the last time I saw anyone selling them.  I bought up a huge bag of them and excitedly brought them home.  Crowders are called that because they crowd together in the pod.  This is actually a good characteristic because it makes the pods split open easily and then you just run your thumb under the peas and they pop right out. Takes no time at all to shell these babies.  Now, try shelling butter beans.  That's a whole other story entirely.  But, crowders aren't very glamorous.  They're kinda pale, round, not much personality, but they taste awesome. 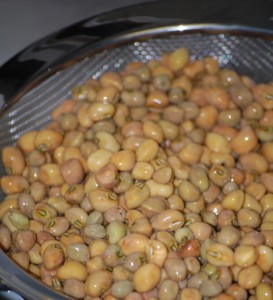 All you have to do is cook them in some salted water.  The salt enhances their natural earthy flavor.  (When I say "earthy" I don't mean they taste like dirt.) They just have a deep, rich flavor all their own. I've read some recipes in which people want to add bell peppers, onions, garlic, etc.  You can do all that if you want, but crowder peas are just perfect on their own merits.


My 7 year old never ceases to surprise me by liking what most kids won't even consider and rejects what most kids practically survive off of.  She couldn't care less about mashed potatoes, but she can mow through some collards faster than a John Deere. So, you can guess what I'm about to tell you.  She digs crowder peas!  I can't wait for my cousin Brooks to read this.  He will probably gag a little, you know, childhood flashbacks.  As parents, we all try to expose our kids to as many foods as possible and hopefully expand their horizons.  Sometimes it works, sometimes not. Some kids are inexplicably picky, some are as adventurous as Evel Knievel. And sometimes they simply surprise you.

If you're unfamiliar with crowder peas, head out to the Farmer's Market, the Soda City Market, or whatever is near you and check them out.  They are inexpensive, easy to shell and cook and they pack a wallop of vitamins and minerals.  Oh yeah, I forgot to mention that they freeze well.  Just shell 'em and pop them into a freezer bag and they'll wait for you.

Posted by Elizabeth at 4:39 PM